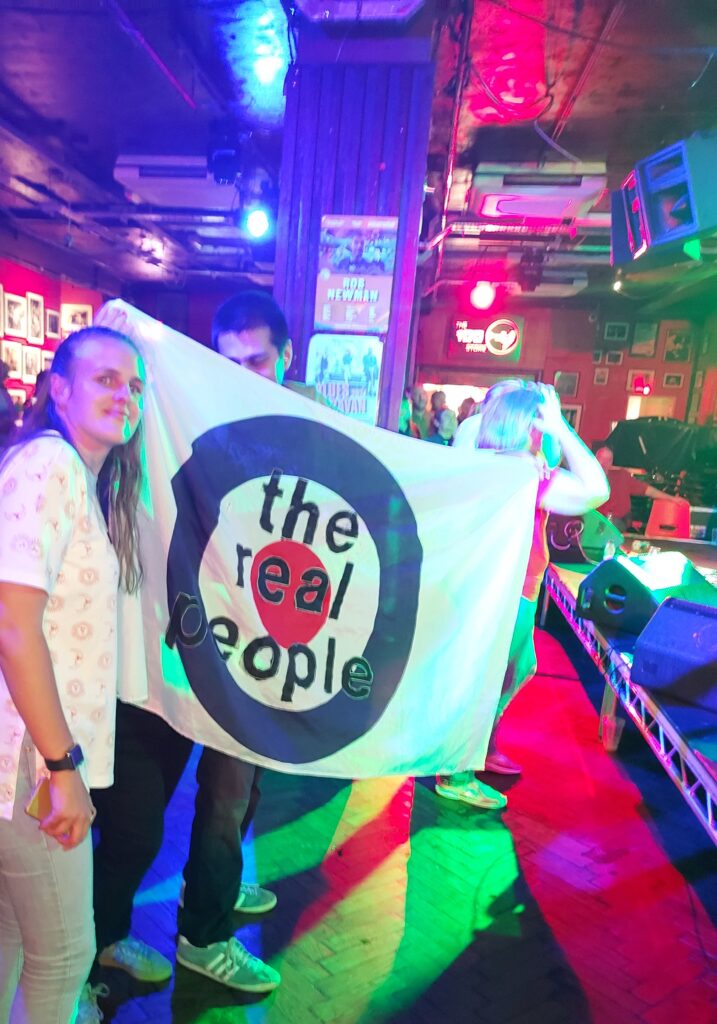 How do you decide between a Wales home game and going to London to see The Real People at the 100 Club? The answer is: you don’t. You buy a £4.90 National Express coach ticket to London, get on the coach, and by that time, the decision’s out of your hands, so you then buy the ticket to the gig on the way.

The coach arrived at Victoria about 20 minutes early, and it was looking unlikely I was going to meet up with my mate Tom, so I took the leisurely stroll towards the venue via Hyde Park. I stopped off at a pub named after a boxer – I forget his name. According to a sign outside, he’d won his first bare-knuckle fight in a 96 bout match; it must have been almost to the death. I chatted with a guy from Bognor Regis outside about the modern olympics. He wasn’t keen on new sports like skateboarding, but I pointed out that there’s a fair bit of skill involved with skateboarding – anyone can run hundred metres.

I found the venue, and with about an hour to spare, I thought I’d grab food. I was but a short walk from the Chinese restaurants in Soho, so grabbed an all you can eat. Here, I was inspired to put a bet on the football. As any gambler will tell you, the Chinese like a bet. Something told me to put money on both Wales and England being held to a draw (there was no value in betting either to win); a fiver on this double would return about £100.

There was still about half an hour before the support band at the 100 Club was due on stage, and I ducked into another pub. Here I met two very lively Italians and we sang “It’s Coming Rome!” together for a few seconds. They bought me a pint and we sat down to watch the Wales game. One of them, Stefan, turned out to be a bit of an expert of slightly less well-known footballers: Matt Le Tissier was a favourite player of his, and I told them I was unsure why he had so few caps for England. Time was ticking on, so I got them each a shot of Captain Morgan before back to the 100 Club.

The support band, a duo, who I think were also from Liverpool, were more than adequate. Truth be told, I think the vast majority of the audience had probably travelled from Liverpool. All very friendly. I had a Tom Hingley t-shirt on and I chatted briefly with one guy about how, despite being a genius and superb solo artist, Tom Hingley, to talk to, is totally bonkers.

So The Real People came on stage, and it was a really good fun show. There was a lot of strobe lighting. Bear in mind that not all Real People songs are really upbeat – there’s quite a few sombre songs in there. But being from Liverpool, it’s almost as if they’re not allowed to not be influenced by The Beatles. I think there are very few Liverpool bands who break this rule. It does seem at times though that bands that are “influenced by The Beatles” sound mostly like The Beatles at their most basic: that distinctive merseybeat sound. They’re aren’t too many who might be compared to White Album-era Beatles. I listened to The White Album on the journey home, probably for the first time never having been a huge fan (obviously I know the most famous songs from it), and I did think: actually there aren’t too many bands that sound like this – maybe, The Pooh Sticks?

From a personal point of view, The Real People have played quite a peculiar feature in my life. For one thing, they’ve played at some quite weird places. They once played a gig, at a kind of one-off mini-festival at Bridgend rugby club’s Brewery Field, which was a bit odd. They played a gig more-or-less opposite my dad’s newly acquired house in Cardiff Bay around 2000 supporting INXS. That was very, very strange: I was walking back from town to my dad’s house, and the Real People were playing there!!

In my teens, before I met my girlfriend, Helen, I had a girlfriend called Claire. At one point, Claire did work experience for Sony Records. She sent me vinyl copies of The Real People’s debut album, along with Rain’s album, another Liverpool band. I never really got into Rain, but I did gradually become a fan of The Real People. But it was a massive mistake telling Claire that I wasn’t that taken by these records, being on a major label etc. A couple of years later, I hitched down to visit Claire and there was a hand drawn painting of the cover of Rain’s album on the wall.

Now from The Real People’s point of view: they have a great big, understandable chip on their shoulders. A band called Oasis basically ripped them off. Basically, this Manchester band went to Liverpool, used The Real People’s studio to record, borrowed all the Real People’s ideas, fucked off back to Manchester, met Alan McGee via Glasgow, and made a mint. I hardly need to point out the ridiculous irony of these Manc cunts going to Liverpool and stealing from them. That’s literally what happened.

There was a guy in the crowd who had a bootleg vinyl copy of the legendary rip-off Oasis demo. He said he’d bought it in Camden. Good luck getting that signed, I told him. I burned my copy of Oasis’ debut album, I told him. But not for the reasons you might think – it was just because Oasis said they were going to be bigger than The Stone Roses.

I think what you have to bear in mind is that even every band in Manchester, however diverse they might be, will probably still admit that they borrowed from The Beatles. I would even include The Smiths and New Order in that. It is practically impossible for any band worth anything to say that they don’t have a Beatles link. Anthony Wilson would almost certainly say that New Order had their roots in The Beatles. If The Real People have taken one thing from The White Album, it’s the word windowpane.

What I like about The Real People is that they’re one of those quite rare bands who can play old and new songs completely interchangeably. They really haven’t lost it. New songs stand up equally well as old. If you’re an old or new fan, it works either way. I danced onstage to Windowpane only because for me it is an unrecognised classic and obviously I was very, very drunk – I think it had been confirmed by then that my bet had come in, after a late equaliser by Poland.

I got some stuff signed by the band. I have a box of postcards from a John Squire exhibition I went to in Salford with a guy who now lives in Cardiff called Jah Scouse. He was at the Stone Roses gig when there were, as he used to say “about ten people there, and twelve of them were staff”. He reckoned I should get all the postcards signed and give them back to John Squire. I’m getting there.

The truth is though: it all comes back to Claire. I’d probably never have listened to The Real People much if she hadn’t sent me their album. Perhaps I imagine I might meet grown-up-with-kids Claire at a Real People gig, but I know that won’t happen. Only thing I’d really like to know is what Claire made of Second Coming. I don’t care if she thinks it was shit, not bad, or yeah, pretty good – especially Love Spreads. I seem to remember her sister Jacqui thought Hup was better than Eight Legged Groove Machine, so who knows, perhaps Claire preferred Second Coming?

But anyway, I’m obviously completely over Claire anyway as that was yonks ago. It’s my last ex, Christina, I’m not fully over. We are still very good pals anyway. To sum up Christina: clever, funny, sexy as fuck. Let me ask you this: New Year’s Eve, 2020, I was outside Buckingham Palace playing a ghetto-blaster. After a few minutes, two armed police armed approached me and told me to turn it off. I said, no problem, but I did ask why. Can you guess what their answer was? I’ll give you a moment or two. Bear in mind, it’s right in the middle of the flockdown etc. Actually had nothing to do with that. I reckon not one in a hundred people would know what the answer from the police would be. When I related the tale to Christina, which for me ranks her as obviously having heavenly connections and puts her in contention for being the next Queen of England, she told me, straight away, just as the police said that it was “because I was in a residential area.” 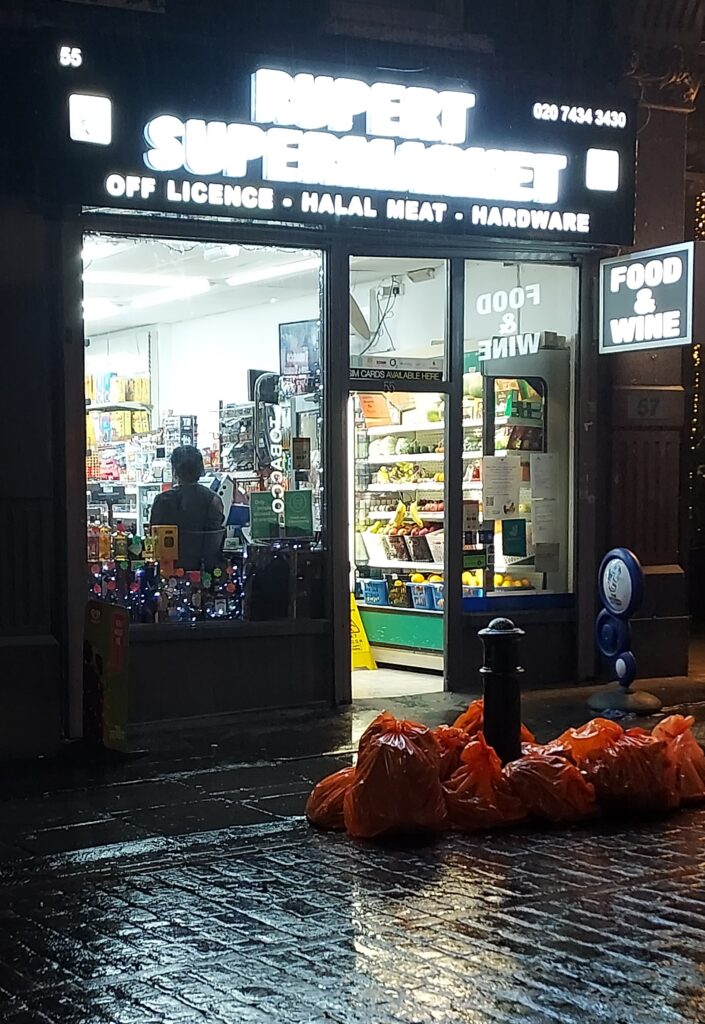 As I left the 100 Club, it was now pelting down with rain, which seemed to have come from nowhere. People huddled under awnings, looking for cabs. I popped down Rupert Street and into the Rupert Supermarket. I bought a couple of cans for the coach journey home. I tried to persuade them I should get a discount due to my name (my middle name, which I normally am too embarrassed about) being Rupert. Even showed them my driver’s license. The girl in the queue beside me thought it was funny anyway.

Spread the love
No comments yet