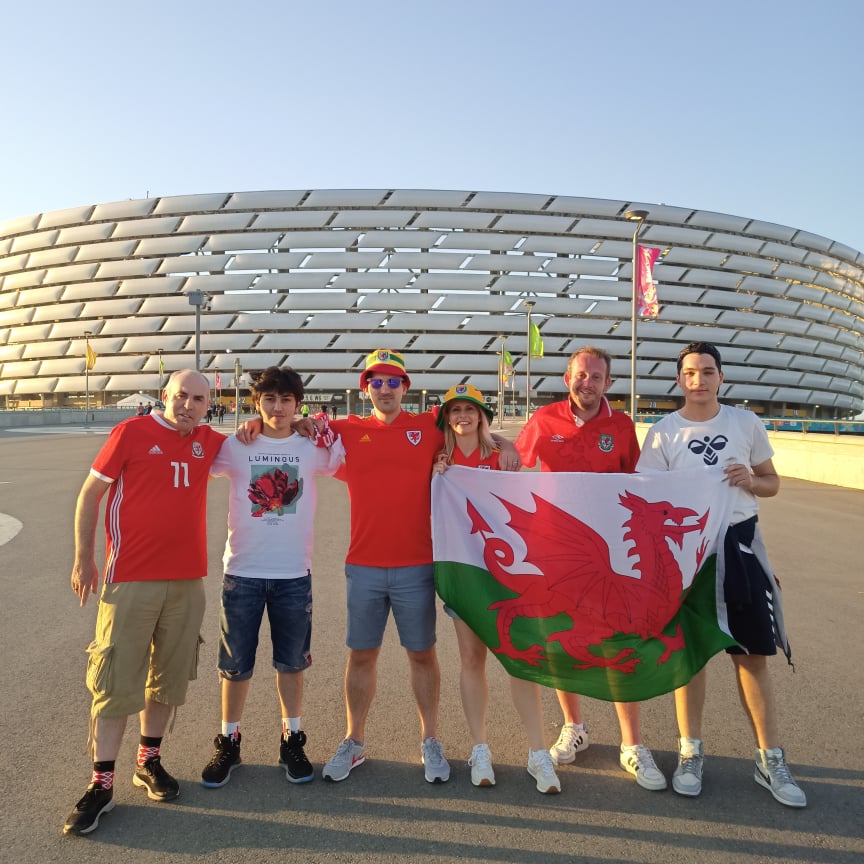 Whether or not to make this trip caused quite a big dilemma, as it probably did for most Welsh fans making the journey. Many others, even some of Wales’ most die-hard fans, had decided it was too much of a hassle and cancelled. Add to that was the expense. Even indirect routes to Baku from the UK, in the little research I’d done, you’d be looking at around £600 minimum. It was Paul “Corky” who put me in touch with Wonky Sheep, the Wales FA fans’ travel operator, which provided the option of a direct flight from Cardiff for not that much more. This option would also mean fewer headaches and that you’d be generally looked after.

I was also concerned about the “isolating” aspect of the journey. I had not even known before contacting Wonky Sheep that people flying out would not have to quarantine on arrival in Baku if they had tickets. So that was a bonus. It was apparent that there would be no getting around technically having to isolate on return to the UK, and that was an off-putting factor for me. I had planned to go and party in London on June 21st if that had still been going ahead.

The bottom line was, I knew I had secured tickets, and just seeing them on my phone (the tickets themselves had not been expensive), and with money I had saved in the bank, I just felt that I couldn’t resist.

The Wonky Sheep hotel option was definitely beyond my budget, particularly as the hotel itself slapped on a hefty “single person supplement” and I would be travelling alone. I didn’t mind being a solo traveler too much – I’ve flown to places alone before – and I anticipated that on a football trip I’d make friends along the way. I ended up getting an apartment for dirt cheap, and that was one part of the trip I got resolved well, especially as the guy I booked with spoke the best English of any resident that I met in Baku.

Just a couple of days before, he advised me that I’d mistakenly booked for five nights instead of six and that he had someone else staying on the night of the second Wales game. But he instead offered me a two bedroom place, for six nights, for the same price. He even said he’d pick me up from the airport, everything. Really couldn’t fault this guy.

Next mistake I made was to try to get a train to Cardiff airport. My taxi driving friend Archie had told me he was certain there was no train station there, but the Trainline App definitely listed Rhoose Airport station. I had not slept and contemplated walking to Cardiff Central, but in the end got an Uber. The Rhoose stop was about five stops from Central. I got out and only now realised the station is a mile or two from the airport itself. I asked a couple of passers by about a bus to the airport – one said I might have just missed it, another said it was not even running. Fortunately I was able to get another taxi to the airport with a reasonable length of time before check in, but I probably might as well have got a taxi all the way.

At the airport there were various journalists and camera crew. I guess they saw this as quite a big deal for the people prepared to make the trip. I advised one that he should bet Wales each way to win the tournament at 200/1 as I had done – insane odds for a team ranked 17th in the world in a 24 team tournament in my view.

I guess with the testing, wearing a mask (which I’m not prone to doing), etc etc there were added stresses, but tension was relieved on assembling at the bar in the airport and tucking into the first beer of the trip. Chatted to a few lads, but I didn’t want to infringe too much, and besides, not having slept, once on the plane, I mostly tried to rest.