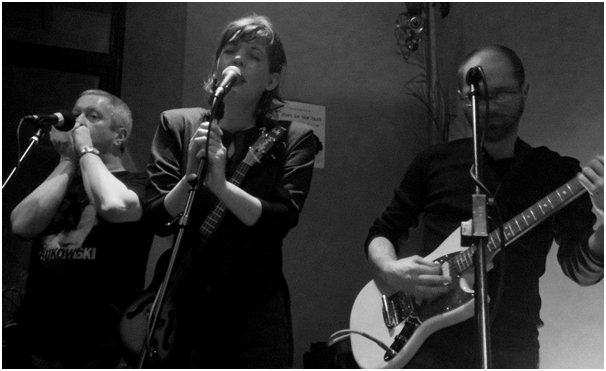 Ordinarily if you’re invited to see a friend’s band play only their second proper gig, you might pay the few quid they’re asking on the door slightly grudgingly, and not have any high expectations of decent entertainment. The Manatees dashed all woeful hopes by playing a barn-stomping set that rightly had the Shot in The Dark crowd, packed into the upstairs section, crying for more by the end.

I had seen The Manatees play a few songs at an open mic, and remember them being quite good but could not have expected them to turn in a performance quite as good as this. You go to see an indie band, and you don’t expect great musicianship, but at least they might be cool. More recently has seen the rise of the “proficient” scene – bands, quite often with a country influence, consisting of people who can at least play their instruments, but frankly, are pretty boring in the main part. Here is a band basically doing a cross between garage blues and bluegrass, that is both fantastically proficient and cool at the same time. They seem polished to perfection, and are already going to have to go some to top this.

Lead singer, Hannah has something of the Harriet Wheeler look about her – sort of posh indie – but has none of the shyness, and instead is incredibly confident. In a zipped up green and black dress, with slightly padded shoulders, she has a kind of regal sexiness, regaling the audience with a smooth, easy vocal. A ukulele is stuck to her like a great big badge, and she plays this with the same assurance.

On either side of her are two equally competent musicians. To her left is boyfriend Cai, who has been in several other bands and plays solo under the name of David Mysterious. A staggeringly good guitarist, with an array of effects pedals which mostly allowed the notes to hang in the air, with the audience hanging onto them. To her right is Andrew, the oldest of the three, and a gifted harmonica player. He also sings, mostly providing backing vocals, though on occasion is the lead. Andrew and Hannah also provide intermittent percussion. They work so well together as a trio, with impeccable timing.

The choice of songs is great. They all have humour and intelligence, along with being playful and catchy. The sound is basically reminiscent of the Twin Peaks soundtrack, or certain numbers from Kill Bill, or another David Lynch or Tarantino film, with the same haunting feel. A painting of a lone cactus in a desert on the wall of the venue seemed fitting. A couple of favourites, all sung by Hannah, were the teasingly seductive “Window Blues” and “Ooh Daddy”; “Human Fly” also stuck out.

It really didn’t seem to matter that all the songs bar one is a cover as they are such unusual choices – this is hardly a pub band running through the hits of Blur and Oasis. The only original song, the self referencing “We are The Manatees” came at the end, and has the same frivolous nature as the Monkees hit of a similar name. The band do promise to add more of their own tunes in time.

I’m sure The Manatees won over many fans tonight. A raffle in the break was a slightly silly diversion, but it kept the fun factor going, with prizes of a t-shirt and mini, hand-made Manatees given out. Each audience member was also given a Manatees badge, and I’m sure most will be wearing these with pride at their next gig in Gwdihw on February 21st. I expect a certain air of anticipation around this event now that Cardiff’s best new band has been discovered.