Bluebirds Have The Last Laugh 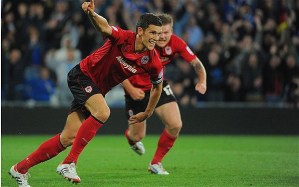 Cardiff snatched a win from the jaws of a draw, in a game which Huddersfield must have been disappointed not to win, if that makes sense. Added to this was the fact that, while Cardiff sported their new home colours of red, Huddersfield wore their away kit, despite the fact that their home kit would not have clashed with Cardiff’s new home colours, although their home kit would have clashed with Cardiff’s previous home colours (now our away kit), and confusion definitely reigned.

It was a testing time for Cardiff fans. I wore blue from cap to trainer, and as it was a wet evening, had a blue umbrella to match, but this went against a large number of fans who seem to have quite quickly embraced the new colours. I didn’t feel out of place – many were dressed in a similar hue to mine – but it did feel slightly odd cheering on a team in the wrong coloured clothing. Bizarrely though, for me, I’m sure it would have seemed even more peculiar to wear red, and although most fans wearing red would say they were doing so to support the team, I didn’t feel it to be a requirement. The wearing of replica shirts is after all a relatively recent phenomenon, lest we forget. Casting an eye around the ground, the highest number of new replica shirts looked to be in the family section.

And it is this section that remains the least vocal in the ground. Just as I never would have thought in my wildest imagination I would see Cardiff City play at home in red, I also would not have believed any visiting team could come to Cardiff and rightly chant, “We Forgot That You Were Here” at us. The latter has sadly been the case for a couple of years now however. Huddersfield in addition also mocked us with taunts of “Wrexham” and “We’re Blue, And We Know We Are” – the likes of which we can expect all season. They were matched by little response. It is as if fans now feel the only talk that needs to be done is on the field of play, but for 89 minutes, there were not too many signs of Cardiff taking control of the game.

Hegulson should really have scored, but hit the bar instead shortly before half-time, and Cardiff had a couple more chances towards the end of the second half, but Marshall was probably rightly the man of the match after denying Huddersfield an opener on several occasions. He might have been disappointed had he missed any of the saves, but he definitely kept Cardiff in the game, and injury time brought the winner.

All the talk pre-season was of the change of colours and fans’ response, but as the opening game drew closer, talk of protest fizzled out, in the end, to nothing, as the club, and police advised against it, but even without this warning, I wonder if it would have amounted to much after all. I myself was in the vehemently anti-red camp, and I still find something distasteful about it, with no clear and apparent reason having been given for the change. The opposing argument – that it is still Cardiff City after all – has rallied strong however, and it was good to see familiar faces again after the summer break, whether they were dressed in red, blue, or fence-sitting purple.

The Keep Cardiff Blue campaign is still alive, but less forceful, and I think most people in support of the campaign will agree that it’s not a good thing for fans to be at loggerheads with each other. Somehow, out of all the confusion, has come a new sense of unity. Even after one game, I’m starting to wonder if Cardiff might after all keep their new colours, ridiculous as this sounds coming from a fervent Bluebird. One game in, on this showing, I’m not convinced that this is a promotion winning side, but uniting, and keeping our heads might be the trick I think, rather than being concerned with keeping blue or red.