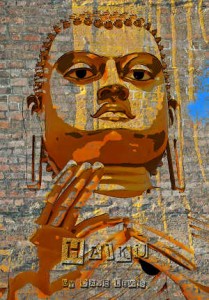 If the blurb of certain other books of haiku I’ve read is to be believed, Wales is a bit backward regarding the publication of this form of poetry. The blurb on Nigel Jenkins’ book “Blue”, published as recently as 2002, claims it to be the first ever haiku collection by a Welsh publisher. Gomer’s “another country: haiku poetry from wales” (the lack of capitals is theirs, and even the editors of this book, including nigel jenkins again, dispense with capitals for this collection) is apparently “the first ever Welsh national anthology of haiku poetry”. And that was published just last year (2011)! This despite the form being developed in the 17th century, as Dave Lewis tells us in the introduction to his own book, “Haiku”, with its origins traceable back to the 14th century. So, it would seem, Wales is only around 4 to 8 centuries late in cottoning on.

It’s a funny form, haiku. It has its supporters and its detractors. It is popular in writers’ groups, and most poets will claim to have at least a few they can reel off. Perhaps the reason that there are, apparently, not a lot of books dedicated to the form (at least in Wales) is that it is a little tricky filling out a book of them. “Blue” has around 100 of the things, with just one per page to bulk it out. For anyone completely unfamiliar with the form, its essence is its brevity – perhaps no more than 10 words per poem, so you can appreciate that a mere haiku per page is indeed pretty sparse. Oh, but it is the depth contained within those words which surely will make you dwell on each page the longer.

Dave’s book is free from pretentions, and he packs in a meaty 5 poems per page. He’s really pushed the boat out in the quantity stakes, with almost 300 little ditties in this one. But quality has not in any way been forsaken – there is good variety, and good quality throughout; he’s clearly put a lot of thought and attention into this work.

Dave forsakes the “traditional” format of 5/7/5 syllables in the vast majority of these haiku (in fact, I’m not even sure if there is a single poem in the book that does stick to this form – correct me if I’m wrong Dave!). There is much debate about how essential it is to utilise this format anyway, and most of the haiku in this book have a syllable count of less than 17. Instead, Dave apparently feels that inserting a “season” word is more of a necessity, as most have this. He also, in the main, quite satisfactorily makes use of the “cut”, ie. a juxtaposition of 2 images.

The book is divided into four seasons, as if to make it still clearer which season each haiku is supposed to tie in with. There are some nice references to nature, alongside poems more personal to Dave and his own life in each section.

Is an effective example of one of the nature-based poems, this particular poem, as you might expect, coming almost slap-bang in the middle of the book.

blowing wet kisses to the wind

Above is an example of a poem where Dave alludes to his own life. In fairness, the book has all sorts; among the 200 odd poems there is humour, as well as several more serious and reflective moments; both modern and more traditional references; some subtlety alongside more obvious attributions – really quite a rich tapestry. The book serves very well as an introduction to the form, but could be enjoyed by experienced haikuists alike. It is as good to read as it is to learn from.

With so many haiku included, Dave has not needed to pad the book out with unnecessary text, as I found “another country” did. There is, as mentioned, a useful, but not over-wordy introduction, and also, an index where some of the haiku are explained. I wasn’t really sure if such an index was necessary, with the poems being so short and really, not so unfathomable, but the explanations are brief, again, lack pretension, and as I say, only for those haiku where the reader may possibly like some extra background information.

So overall, this book is a great success, and one Dave should be proud of. Dave keeps a track of the progress of his books on Amazon’s charts, and this is one book that deserves to do well, as an excellent example of its kind.

The book is available to buy from here

Read more about Dave, guest poet No.5 on Pure Poetry