The Blues Are Back In New York! 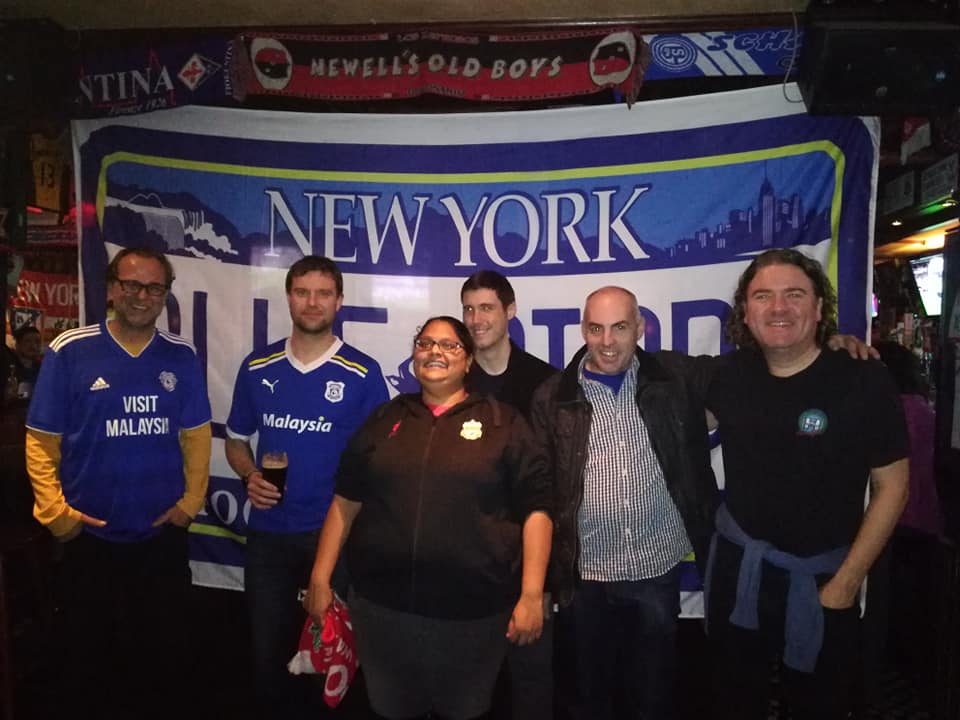 During the World Cup, my publisher was talking about a Premier League edition of “The Blues Are Back in Town”. Somehow the idea of doing a launch in New York was discussed. As it was also my birthday in October, I decided October would be a suitable time for me to go. And so a couple of months on from that first conversation, I’d arranged with fellow Parthian writer, Lloyd Robson, that I could stay with him and the idea was becoming a reality.

The day of my departure came about and I was up bright and early, so I packed the last few things of mine and headed off to catch my coach to Heathrow. I was on the bus and on my way, still nervous for all kinds of reasons: would my bag be overweight? Would I be questioned about why I had so many books with me? Would there be any problems meeting up with Lloyd? But for now, there was not much else I could do but sit back and listen to tunes on my mp3 player.

Arriving at Heathrow, I had one quick fag before continuing to find my flight. There was a slight confusion as I was sure I’d booked with Austrian Airways, but on the ticket, it said United. It turned out it was indeed United, and fortunately, my case was well under weight so there were no real problems.

My seat on the plane was second from the front (obviously not first class!) and it turned out I was sat next to a very friendly American called Roger who looked a little like Woody Allen which was ironic as I’d planned to see Woody Allen on my trip. I explained to Roger the main purpose of the visit, to do a little launch of my book, and Roger even said he might try to come along!

When Roger and I weren’t talking, I watched three films: one that Roger recommended called “A Quiet Place”, “Fever Pitch” which was not as good as I remember it being, and a new one called “Book Club”, which was more of a chick flick, but still, enjoyable enough. I had five or six glasses of wine on the flight, managing to spill two of them. The time passed relatively quickly.

Ewark turned out to be quite a drab airport. The queue (or line, as they would say in the States) for customs was long and took quite a while to get through, but again, turned out to be straightforward after all.

I exited the airport and had my first cigarette on landing. Here, I had a slightly bizarre experience as someone who asked me for a cigarette looked exactly like Sid Owen who plays Ricky from Eastenders! “Ricky?!” I said, and he seemed to reply affirmatively. I’m almost certain it actually was him! Ricky nipped off to catch his Uber, and I set about finding where I needed to catch a train. I went through crowds of people going this way and that and eventually found where I needed to get on. “Two stops” I was told.

I was due to meet Lloyd at TGI Friday’s at Penn Station. However there was some confusion as there seemed to be more than one Penn Station. The station I first of all got off at was definitely the wrong one, it turned out. I went up and down elevators, couldn’t find the exit even and definitely couldn’t find TGI Friday’s. I asked people, but no-one was very helpful. It was dark, I was tired, and I felt very lost and alone. Eventually someone suggested I go to a particular platform and I could only imagine he meant I should catch another train.

I sat at the front of a carriage, clueless as to whether I was on the right train. Finally, a ticket inspector came along and said, yes, this was right and that I should get off at the last stop. The train creaked and rattled and it occurred to me that I wasn’t having the best welcome to America.

Finally, we arrived at the last stop. I got out along with everyone else and followed the crowds. I walked through the station, and then I saw a TGI Friday’s. I prayed that this was the right one, and as I approached, I could see Mr Lloyd Robson sitting at the bar! I don’t think I’ve ever been so relieved to see someone! Lloyd greeted me in a very friendly manner and I quickly ordered a beer.

Soon after, I nipped out for a fag and saw New York at street level for the first time. 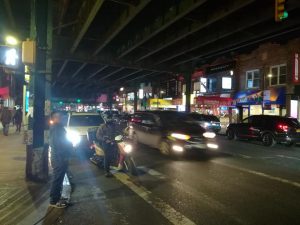 Lloyd and I drank and chatted for a while before jumping on a tube to his neighbourhood, Jackson Heights. My first impression on seeing the area around Roosevelt Station was that it was like a scene out of “Bladerunner”. Anyway, I was quite keen to be unburdened of my bag and case, but Lloyd suggested we get something to eat first, so we stopped at a little Indian restaurant. I wasn’t especially hungry, but I did order a goat biryani. The goat was on the bone and a bit tricky to eat. Probably, I should have ordered lamb.

Lloyd wolfed down most of his, but we did both have some left over which we took with us. Finally, we got back to Lloyd’s little apartment which was to be my base for the week, and I no longer had to worry about my luggage.

Lloyd’s apartment had the look of that of a writer, with shelves full of books. It actually reminded me a little of my friend in Cardiff, J. Brookes’ flat, with postcards and little knick knacks here and there. Lloyd explained the house rules, the main one being that you had to smoke in the bathroom. Lloyd smokes, but his wife Catherine, who was away in Virginia, doesn’t. Lloyd had already told me about how he currently lives between Virginia and New York.

I think we stayed up and had another beer before it was finally lights out and I put my head down on the couch in Lloyd’s living room. END_OF_DOCUMENT_TOKEN_TO_BE_REPLACED