Fisk picks up his ticket 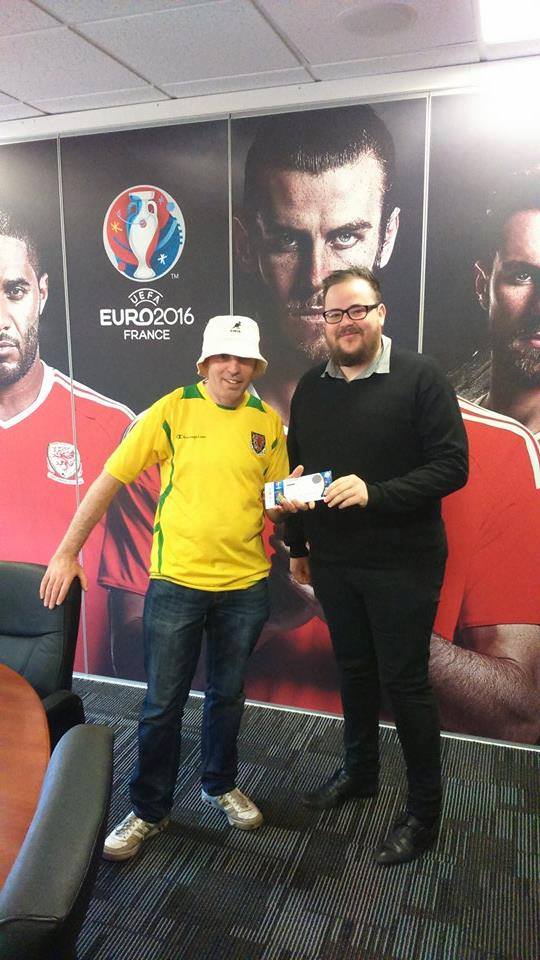 Gold Road’s sure a long road sang The Stone Roses…

The FAW office is based just near to Cardiff’s “Magic Roundabout” but for me required a roundabout walk to reach as a bridge nearby that is being replaced is still incomplete.

Nonetheless, I set off by foot to get there to pick my ticket up on a Monday morning, dressed in my gold Wales top, along with gold and white Adidas trainers sold to me by a Mr A Rivers, my bling watch, my smart gold fleece, a present from a certain young lady, and a floppy summer hat.

I had recently also purchased a segway (hoverboard), meant for the same lady in question (who now has it in her possession), but as I was yet to become an accomplished rider of this form of transport, the use of the segway was not an option and with no other means, eg. car or bike, by foot it had to be.

I should at this stage point out as well that the gold Wales top was presented to me by a friend and fellow Cardiff City fan, who is currently serving a prison sentence. Being 67, my friend had been looking forward to seeing Wales qualify for a tournament for most of his life, but was going to have to miss out on this one, so I’ve pledged to wear this shirt at the game I would be picking up a ticket for, Wales against Russia.

The roundabout route involved going over Cardiff’s aptly named Smart Bridge, positioned on Smart Way – someone must have had a sense of humour when naming both bridge and street.

Finally, I neared my destination and now only a short wait in reception before I would finally pick up the ticket. It helps to have connections and my brother is very close friends with the husband of Lucy, one of the staff at the Wales FA who had helped me get this ticket (I believe it’s a return from one of the players who are given tickets for their family and friends).

There are people I know planning to go to France ticketless, but I really see this as a bit ridiculous – to go all that way and not even make an effort to get a ticket for at least one game as after all, that is the raison d’etre for the whole shebang.

A smiling gentleman came down some stairs and I now had the ticket in my hand, feeling not unlike Charlie Bucket with his gold ticket – I’d waited weeks for this. I asked if I could have a photo taken, and another member of staff very kindly allowed me into some kind of committee room upon which a large photo of some of the Welsh team adorns the wall, and it was in front of this that the smiling gentleman and I were snapped.

And so it was from here that I headed home once more, not knowing now quite what to do with the ticket in the interim before the event – should I keep it in a safe? Was someone really going to go to the lengths of pinching it off me, bearing in mind they’d have to also pinch my passport and make an effort to make themselves look like me. Unlikely I suppose. I was going to simply have to hang on to it and wait.

The other thing that crossed my mind on my return journey was – what if Wales did make it through the group stage – what was I going to do then? Wouldn’t I have to return to France to see the conclusion of the tournament? For us Welsh, this is a whole new experience. It’s certainly a reason to try and make as much money as possible in the weeks leading to the tournament, and I’ve been frantically trying to do this.

But for now, with flight secured via a contribution towards most of the cost by my publishers, I more-or-less had everything I needed. It was now just a case of waiting the few weeks for the actual event…