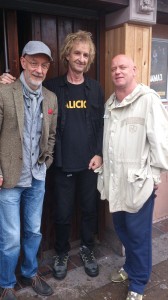 A Fortuitous Shot of the Band Outside Before the Start (is that an Ozric Tentacle in the middle?)

One word summary of the night: beautiful. Three abiding memories of The Orb: 1. Driving around highlands of Scotland with girlfriend-at-the-time, Helen, in a clapped out Austin Allegro (‘Rustin Aggro’), with UF Orb blasting out – that was pretty beautiful. 2. Going to Club UK in London around 1994, and seeing a poster for The Orb’s “little album”, ‘Pomme Fritz’, waiting at the tube station afterwards at around 6am while on a particularly potent E, and thinking the poster looked pretty beautiful, and feeling a need to own the album (later did get it, and v good too). 3. Going to see an Alex Paterson DJ set at Bogiez at around the same time. He cancelled. This wasn’t beautiful, but if memory serves, it didn’t seem to matter too much – the replacement DJ was still pretty good, and there was something still cool about being at the gig where he’d cancelled.

Despite being a dance act, The Orb were quite heavily promoted in the NME. Around the early 90s, a lot of indie kids were, after all, getting into dance music. I’m pretty sure the majority will concede that dance music is cooler than any guitar-based music. I also think it has better longevity.

If you go to see a band now that you might have seen around 20 years ago – and I’ve seen quite a few of these in recent years – I’m just not sure that it works in the same way. Lyrics that might have meant something to you in your teens, in the main, no longer have the same resonance. The point about dance music is that, if it made you dance 20 years ago, it’s likely to still make you dance. I had said to my friends before the start that I didn’t expect to be dancing tonight, but The Orb had not been on the stage for long before my natural inclinations took over, and my limbs began to move about freely.

They might have played for half an hour before I heard a recognizable Orb song – they have, after all, released a full 10 albums since I’ve purchased one of theirs! – but it was all good, and the sound was definitely distinctly Orb-like. By the time the pulsing rhythms of hit single ‘Blue Room’ kicked in, The Globe was beginning to have the look and feel of an old school night club. Certain favourites like ‘Perpetual Dawn’ were bypassed, but of course, a version of ‘Little Fluffy Clouds’ was inevitable, and this merged nicely into ‘Loving You’.

Back in the day, the love vibe was such a vital part of the scene, and you might imagine this could never truly be replicated, but I really did feel it tonight. The feeling of togetherness is such an essential part of the dance music culture, and The Orb are a fine facilitator of this feeling. There may be some egos in dance music, but this does not prevent a feeling of unity between producers and the crowd, with the music that’s being produced being the bond. There is no rock band that can properly emulate this. Despite the efforts of bands like The Stone Roses, the perception remains that the band members are the people to look up to, however much you’re enjoying yourself in the crowd. When it’s dance music, whether it’s at a gig like this, or in a club, it’s the music that everyone enjoys on an equal level.

And if I ever forgot this, and thought, look, we’re just in a room with a couple of old dudes playing some tunes through their laptop, and with a quite fancy slide slow in the background (really, pretty good actually), I quickly dismissed this, and just went back to enjoying myself.

Not lacking with The Orb as well of course is a sense of humour – from silly titles and silly samples, to perhaps a take on the ridiculousness of our small place in the universe. Selling leftover promotional t-shirts from 2004 at the end for a fiver also struck me as being a little silly. And despite their only having small ladies’ sizes, I picked one up – someone will have it, I said. On the back it says ‘M.I.A. 04’. Missing in action, of course – you should see my missus in action, I joked. ‘Missus in Action’ – that’s an Orb title right there.

This was a Glastonbury warm-up of course. They may not be the trendiest band on the bill, but I would definitely recommend anyone going to get along to The Orb on Saturday night for a full-on, chilled-out party vibe. 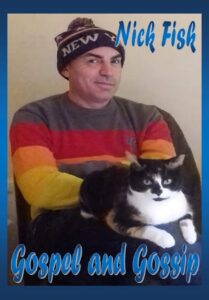