The match was not due to start until about 2pm, but kicking out time at the hostel was 10.30am, so I had to get up and get going. I decided to stick to my plan of making my way leisurely towards the ground, which was approximately a forty minute walk from the hostel. I stopped on the way and had a coffee and a tasty bacon and egg roll.

It was a nice little area near to the ground. There was a very good Oxfam record shop which I browsed in, but fortunately, there was nothing I desperately needed to buy, because I wasn’t sure if I’d be able to take it back on the plane. And then funnily enough, I found a very characterful pub nearby that kept customers entertained by means of an old fashioned record player! So of course I stopped here for the first pint of the day, taking my time as I was in no rush.

Eventually, I made my way into the ground. It was a small ground, home to Grange Cricket club. Cricket is of course not a big deal in Scotland. Even Zimbabwe were favourites to win the match, although they had in fact lost the first of the three T20s two days before (in the end, typically, the only game of the three that I bet on), so it was essential Zim won this one to have a chance of winning the series.

The first thing I did on entering the ground was approach the side of the pitch near to where the Zimbabwean players were warming up with a view to getting my ticket signed, but they didn’t appear to notice me, so instead, I continued to walk round the pitch, looking for a suitable place to camp up to watch the game. I settled on a view from the corner, and then got myself a drink. I was also seated conveniently close to the bar.

There was a nice, convivial atmosphere. Behind me was a guy who would spend the entire day actually making cricket bats. The weather was not so bad after all, with just a few clouds about.

It was at this point that I noticed that on top of one of the advertising hoardings around the pitch in front of me was placed the leftover skin of a particular yellow fruit. I wasn’t sure if this was simply a piece of litter, but for the removal of any doubt, once I’d finished my pint, I picked it up, and placed it in a nearby litter bin, along with the empty plastic cup, and bought another drink. Moments later, one of the Scottish team came running up and placed two cricket bats in front of the same advertising hoarding. I wasn’t sure exactly what he was doing – maybe some kind of photo opp, but I didn’t actually see anyone take a photo.

Shortly afterwards, a slightly more senior Scottish fan asked if he and his friend could sit in the seats next to me. He turned out to be extremely friendly, and as the game began, we chatted quite frequently about this and that. He had brought an umbrella, but he said in fact this was a good sign as whenever he took an umbrella anywhere, it never rained, as proved to be the case today. He told me a little about the Grange cricket club. We talked a little about football, and we discussed some of the Scottish players who’d played for Cardiff City, including Kevin McNaughton, and I told him the chant we had for McNaughton. At one point, I spilt a little of my beer on his umbrella, so after apologising, I said, well at least it’s getting some use, and remembered a joke I’d recently heard about someone spilling drink on his lawn, coming to mow it and finding the lawn half cut.

Zimbabwe had won the toss and elected to bat first. Personally, in a T20, I would have thought it might be preferable to chase a target. Just as in the first game (which I didn’t see), this was quite a low scoring affair, with not that much big hitting. Zim reached a total of 136, and those of us among the Zimbabwean fans in the crowd considered this to probably not be enough, being a lower score even than Scotland’s fairly low winning total in the first game.

During the break before Scotland came out to bat, I wondered around talking to a few other Zimbabwean fans, who were all in very good spirits, and we took a few photos together. I was actually really enjoying myself. I had tried to call a friend in Zimbabwe, Patrick, but couldn’t get through to him, but I did keep various people updated with messages and photos in a WhatsApp group. Given that I’d been planning to hopefully get out to visit Zimbabwe at some point over the last few years for the first time in quite a long while, getting up to Scotland to support Zimbabwe in a cricket match seemed like almost a next-best thing to do.

Cricket, as always, involves a fair bit of drinking, so the queues for the loos were inevitably quite long. With it being a T20 game, there were also blasts of music whenever a boundary was hit or a wicket taken of course, which added to the atmosphere. It was really a good fun occasion, with the cricket itself certainly being good entertainment, being fairly close throughout.

Although Zimbabwe had not amassed a huge total, just as Scotland had, Zim were able to take a couple of quick wickets early on. At one point, Archie back home told me Zimbabwe had gone to 5/1 to win the match, but just as I was looking at potential betting options, they took a wicket and the odds dropped back again. Next in for Scotland was Richie Berrington, who was Scotland’s second top scorer in the first game and today was celebrating his 250th cap! Obviously, quite a milestone and one which he was presumably intending to make a memorable one, so he was definitely going to be a danger. The taking of his wicket when he was on 42, two shy of his first match score, was potentially fairly pivotal.

Nonetheless, going into the last couple of overs, even going into the last over, Scotland were still favourites, with not too many runs to get and plenty of wickets in hand. But then the quite extraordinary happened. Incredibly, Scotland lost their last four wickets in the first four balls of the final over! The whoops of delight from Zimbabwean fans, including myself, increased in vigour after each successive wicket taken, before, quite incredibly, Scotland were bowled out ten runs short of Zimbabwe’s total with two balls left! We all leapt to our feet and ran over to congratulate the Zimbabwean players. 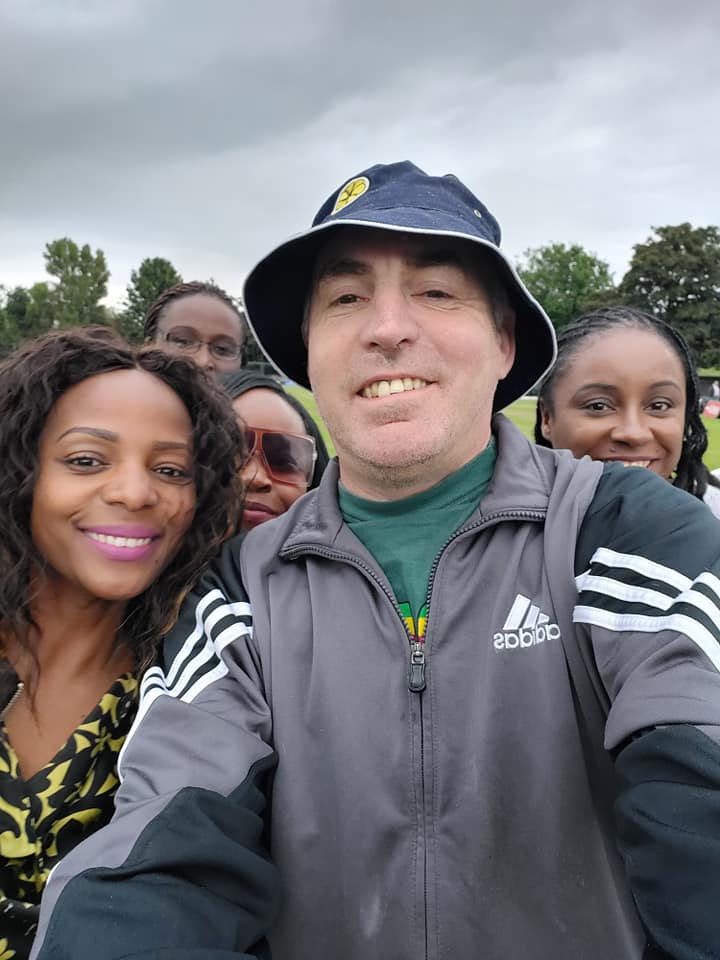 I once again tried to get my ticket signed, but now was told that in fact the players were not allowed to, apparently in some kind of Corona bubble it seemed. I took one or two photos of the players though. I also had a selfie with some female fans who had been seated near to me during the game. They were dressed quite smartly, but I don’t think they were the Zimbabwe WAGs, probably more likely aspiring WAGs. I also chatted for a while with another fan, discussing the game as a whole.

As there had been no rain, I had a fair bit of time spare before my return flight, but with some amount of uncertainty about how easy it was going to be for me to get buses, I thought I might as well start making my way back.

So the series was tied at 1-1, meaning that the decider was looking like being quite an exciting prospect. As it turned out, the team that won the toss again elected to bat first. This game turned out to be much higher scoring, with Scotland first registering a score of 177. Yet again, they were heavy favourites for a long period, but yet again there was quite an amazing finish.  With, I think around five overs to go, Milton Shumba stepped up to the mark, and incredibly hit 66 from 29 balls! Along with his partner, Zimbabwe took 25 in just one over.

A shame I missed that one after all. I had been watching the latter stages at a friend’s while getting ready to go to the gig I had tickets for in Birmingham. As he was still getting prepared, I popped out to get petrol, deciding that with around five overs to go, Zimbabwe had no realistic chance of winning. How wrong could I have been! So not only did I not see the game live in the flesh, I even missed the live footage. I did however catch up with it on YouTube, and as the commentator said, perhaps they were dancing in the streets of Harare? To be honest, actually quite unlikely because I think Zimbabweans have been so unaccustomed to sporting success, or even good news of any kind, that they probably were not even tuned in back home. But you never know, this fabulous, exciting victory might prove to be the turning point in Zimbabwe’s prospects.

Footnote: There was one further noteworthy incident on the return journey. I couldn’t get a seat at the bar in Edinburgh airport, so instead I bought a “meal deal” from Smiths. I know when getting these meal deals, you’re supposed to get all the most expensive things to make it better value, but I in fact selected a cheese sandwich, a grab bag of salted crisps and some orange juice – because this was what I actually wanted.

Anyway, I took these onto the plane with me. As we were given the instructions about having to fit an oxygen mask in the event of an emergency, I shouted out enquiring if we should first take off the masks we were already wearing as this was not part of the instruction. A guy, dressed smartly in shirt and tie two seats to my right, calmed me down in, in fact, a very efficient manner, making me feel much more at ease.

A little while further into the flight, I reached into my bag, intending to take out the bag of crisps. Due to the pressure, the bag had grown considerably in size, puffed out like a balloon. I honestly thought that if it popped, it could be dangerous, or at least would make such a loud noise as to be a disturbance. So I called over a steward and told him I had something potentially dangerous in my bag. A passenger in front of me looked around as I told him that it was a packet of crisps. I think everyone thought this was some kind of joke, but genuinely, I was a bit worried about it. Both the air steward and the guy to my right assured me it would be fine. But, yes, for a moment, as I placed the bag carefully back on the floor of the plane, deciding to not after all attempt to open the bag, I wondered if I was going to become known as the crisp packet bomber.