The Adelines with Paper Factory and Why We Love, Buffalo Bar, Cardiff, 30 June 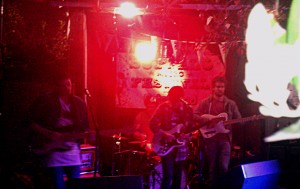 It was a grim grey night at the back of the Buffalo bar, more like the end of September than the end of June. Take away band members with their friends and family, there were no more than a handful of others, which was a shame. Perhaps they were all at Glastonbury, in the kind of conditions I would not have relished spending another night in a tent.

Caught the last few songs of Why We Love. First of these had a nice bass hook, the second was a cover of Elvis’ “Devil in Disguise”, which struck me as a slight mistake, but I might have seen it out of context. The last song was quite Strokesy. Overall, came across as quite a reasonable 3 piece.

Paper Factory began with guitar problems, but quickly recovered. A quite decent rock act, with multifarious influences – anything from 70s rock to more contemporary acts like The Editors. They appeared like the kind of guys who just enjoy playing rather than having any aspirations of stardom.

It’s always impressive though when after seeing 2 quite decent bands, a headliner takes to the stage, and magically, they instantly fill the air with a sound that might fill out the Millennium Stadium. The Cranberries supporting REM in 95 at Cardiff Arms Park springs to mind, though the members of this band would barely have been born then.

The Adelines definitely have a sound reminiscent of early 90s indie acts. Something like The Heart Throbs or several other jangly indie bands of the time. No doubt The Cure are also a favourite of theirs. Singer Jen even has an affection for shoe-gazing, which I have not yet figured out if it’s affected or not.

The video for single, “Alleyways” sees her penning lyrics in a bedroom or lounge setting, and you sense that the band has spent many lazy Saturday afternoons practicing in bedrooms or garages. It’s a polished, perfected sound, but with an equally beguiling level of innocence. The lyrics have a kind of romantic, ethereal quality to them. Impressively, about 2 thirds in, I’m trying to think what one of the songs sounds like, and it occurs to me that it must be The Adelines themselves, which demonstrates that stylistically, they make an impression.

If I had a criticism of tonight’s performance, it was that Jen’s vocal was not quite as strong as I’d heard it before – I have seen them play, first by chance at Gwdihw, and then as part of a bill put on by, erm, Bill of Godisnthetvzine at Dempsey’s, and on those 2 occasions, I think the vocal was stronger, but it can’t have been easy outside in damp conditions.

Their next gig will also be outside, on the introducing stage at T in the Park. I’m sure they will win over the trained ear of the Scottish crowd. They have already been signed by Radio 1’s Jen Long – they have a cassette out on her label, that is limited to 50, and perhaps could become a sought after item. I saw Radiohead in a small club on St Mary Street (can anyone remember the name of the club before it became The Emporium? Sheep on Drugs also played there – much better than Radiohead!); I saw Coldplay play to a small crowd at Clwb Ifor Bach. I wonder if The Adelines at Buffalo could be another one to add to the list of bands seen before they go interstellar?