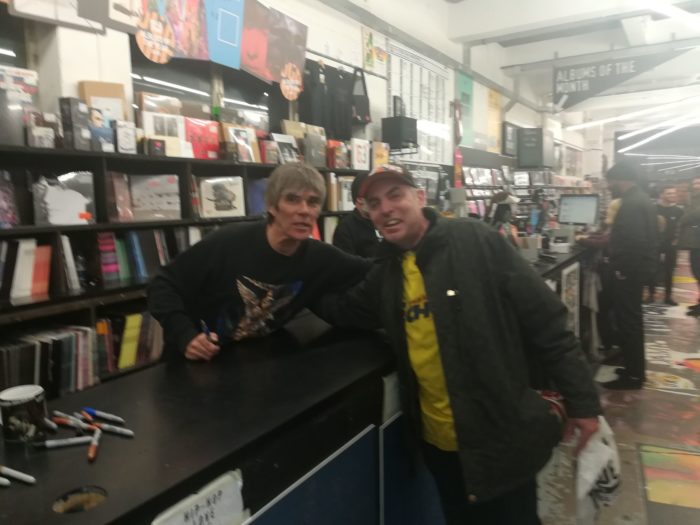 A trip to London gave me the opportunity of visiting my favourite person, ie. my super ex-girlfriend, Christina. Even though we’ve split up, we’re still on good terms. I’m even friendly with her new boyfriend, Tom, and in fact, as Christina was working on the Friday evening, it was Tom I met in their local pub to watch the France v Wales 6 nations match.

However, the primary purpose of this journey was in the hope of meeting Ian Brown, who also ranks pretty highly in my favourite people list. My brother had tipped me off that Ian Brown would be doing a record signing a few weeks previously, but he was unable to come as his wife had just had an operation. As a Christmas present, my brother had bought me a Cardiff City replica shirt, the same type that I once threw onstage for Ian Brown, which he famously wore at the gig in Newport back in 1995. Obviously, my brother wanted me to try and get it signed.

Unfortunately, by the time I came to try and get a ticket for the signing, they had sold out. All I could do was order the album. Earlier in the week, I rang the Rough Trade shop where the signing was taking place, with the pretext of covering the event for Louderthanwar. I was given someone’s email address, who in turn gave me someone else’s email address. It wasn’t looking especially likely that I was going to be able to get in without a wristband.

Undeterred, the next day, the Saturday, with Christina working again, Tom and I headed off for the shop in the hope of wangling a wristband somehow. We had plenty of time so stopped off in Camden for a nose around. We got to the shop for about four o’clock, with the signing not due to start till about six. There were a couple of people who were already queuing up who I spoke with briefly. I went into the shop and made enquiries, but I was mostly met by fairly negative responses in terms of being able to get in for the signing. I did at least pick up my CD copy of “Ripples” that I’d ordered.

It was very cold and neither Tom nor I were especially keen on simply standing around in the icy weather. I went back to a shop I’d seen near Aldgate station and bought myself a scarf. We went back to the shop again, this time to ask if there was any chance of there being a reserve list. I was told, no, but the best I could hope for was that if I came along at the end, I may just possibly get in.

So Tom and I went to a nearby pub to watch some of the Ireland v England match. At half time, with the scheduled start time of the signing approaching, we thought we’d head back to the shop in the off chance that we might see Ian Brown going in. As we walked towards the shop, we saw the people who had been at the front of the queue. The signing must have started early after all. It occurred to me that I could have asked them for their wristbands. I saw another guy who looked like he might have already been in, and asked him, but he said they were cutting up people’s wristbands as they left. 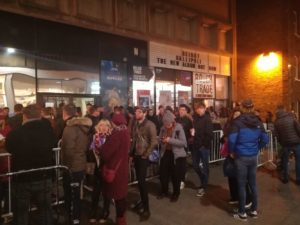 We got to the shop, and could now see the big queue outside the shop. Now it appeared that our only choice was to wait till the end and see if we could get in then. We decided we’d camp up in the bar right next to the Rough Trade shop. We had a game of table football, which Tom won. Quite an achievement. Fisk is rarely beaten at table football.

We went out for a cigarette and spoke to a couple more people who had either already been to the signing, or had wristbands and were waiting to go in. Then I saw a young guy dressed in a Stone Island jacket just outside the bar. I shouted to him, expecting a similar conversation to the one I’d had with several other people. I told him I was hoping to go in but didn’t have a wristband. He told me he might have one spare! I couldn’t believe my luck.

I quickly went round to the front to the front of the bar so I could talk to him more easily. He told me that as he and his dad had wanted to buy the album on multiple formats, they’d acquired a spare wristband. Wait here, the guy told me, and he went to speak to his dad. I did exactly as I was told. Quickly, he came back, spare wristband in hand. I offered him money for it, but he declined this saying, “We’re all Ian Brown fans.” What a nice bloke!

Tom put the wristband on for me. He was going to have to wait in the bar until Christina finished work, while I went to join the queue. I was incredibly excited, as you can imagine, and really could not believe my luck. It just goes to show I suppose that in these sort of situations, it’s always worth talking to as many people as you can.

Shortly after I joined the queue, a young woman came up asking what the queue was for. When she heard it was for Ian Brown, she was beside herself, clearly quite a big fan. But everyone told her she wouldn’t get in without a wristband. She seemed really keen to see the Monkey King as she referred to him, and if I’d been a saint, maybe I’d have parted with my wristband, but I ain’t no saint! Eventually, her friends managed to drag her away saying she wasn’t going to get in, but she give her name, Laura, and asked if we could pass on a kiss to Ian.

Even though I was in the queue, I still had a slight doubt about whether I was going to get in. It did appear they were checking names against wristbands as you went in, and of course, my name wouldn’t have been on the list. However, I was assured by someone else in the queue that all you needed was the wristband and the check at the front was for people who were still picking things up. I smoked a few nervous cigarettes while in the queue, but the time did pass relatively quickly, especially as I was chatting to the guy in front of me, Hassan, who was clearly quite a big fan. 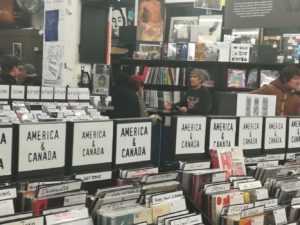 Finally we were at the front of the shop, and a quick flash of the wristband, and I was inside the shop. I was still in a mild state of disbelief that this was happening. There was still quite a considerable queue once in the shop, so it was still going to take a while. I texted friends and my brother, keeping them updated on progress.

They had stipulated that Ian would only be signing copies of the new album, but still some people had taken extra records and other things to get signed, and it did appear he was obliging. The guy two places in front of me seemed to have his entire Stone Roses collection with him.

Finally it was my turn, and I stepped forward. I was a bag of nerves, I’ll be honest. I unzipped my jacket and showed Ian the Cardiff away shirt I was wearing and asked if he recognised it. I even asked if he’d like to try it on again, but he said he’d better not “it might cause a riot”.

Ian was absolutely lovely, a real gent, and we chatted a little about the Newport gig. He told me there was a guy called Big Benji from Newport who was somehow involved. This was fresh information for me, and I wondered who this Big Benji was. I wondered if Tony Rivers who wrote the “Soul Crew” book, and documented the riot that took place would have had any idea about Big Benji (I have since learned that this was Benji of Manchester band, Audioweb).

This conversation threw me a bit, and I must admit, with me being genuinely starstruck, I somehow forgot to say all kinds of things I intended to say. I was like an actor forgetting his lines. Or maybe it was more like visiting a GP. I’d got my prescription – just meeting Ian and having a photo with him was probably enough for me – so I was happy enough, and didn’t feel like I needed to prolong the moment especially.

So after just a brief meeting (I’d also got the CD signed to my brother Ade), I walked away, in a bit of a daze at what had just happened. I walked towards the exit of the shop. Then I suddenly remembered I had meant to ask if he’d ever like to do an interview for Louder Than War. I went back, but the staff weren’t very keen on me returning, however after he’d just finished talking to someone else, I quickly called over asking about the interview, and he said he no longer does them. This was enough for me and I went back to the pub to meet Tom and Christina who had now finished work.

I was almost hysterical by this stage. I don’t know why, but Ian does make me laugh. I’ve always thought he’s very quick witted. Or maybe I was just extremely happy, or something. But anyway, only now, as I spoke to Christina and Tom did it occur to me that I’d actually forgotten to do the two things I was most intent on doing, ie. giving Ian a copy of my book, The Blues Are Back in Town and getting the shirt signed!!

Well, there was not much I could do now, but I did go back to the shop to see if I could at least give Ian the book. I spoke to the bouncer on the door, and he wasn’t going to let me in, but then a member of the Rough Trade staff came over, and I handed the book to him, and he did promise he’d pass it on. I would have much rather give Ian the book personally, but there we go.

So, despite the odds, it was mission accomplished in terms of meeting the great man. I now just have to meet Reni and I’ll have met all the Roses, having met John and Mani a few times. I may not actually have achieved the things I was meant to achieve, bizarrely, but honestly, for me, just to shake hands with and meet King Monkey was good enough. 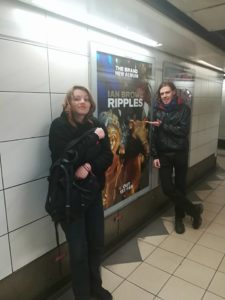 Christina, Tom and I went for a nice curry before back for a little drink and I was home in Cardiff the following day. What with an unlikely Wales win in the 6 Nations, a good win for Cardiff against Bournemouth, and meeting Ian Brown, I would say it was a good weekend all round. I even managed to win the local pub league poker the night I got back to top it all off.

I saw someone on a facebook page saying they could die happy having met Ian Brown at the signing in Manchester the day before the London event, and I can safely say I had the same feeling.

This article originally appeared on Louderthanwar in Feb 2019

Ripples is available now on all formats and streaming services