My Indonesian adventure began with a slight dilemma. Waiting for the National Express at the Cardiff Uni bus stop I’d got chatting to a young football fan, and the dilemma was: do I then sit close to the guy to continue chatting or not? In the end, I chose a seat near to the back of the coach, while my football fanatic friend elected to sit near to the front.
About halfway through the journey, my young travelling companion needed the loo and the banter did carry on when he came out. I discovered his name to be Charlie. Charlie was a Carshalton Athletic fan. Being rivals of nearby Sutton Utd, we discussed the recent cup run of the team. Charlie had in fact attended the match versus Arsenal, but had put rivalries aside and gone in the Sutton end.
I had with me one copy of The Blues Are Back in Town and anticipating I was unlikely to meet a more enthusiastic follower of football throughout my entire vacation, I let Charlie have the book. Charlie said he wasn’t much of a reader but by the time the coach pulled into Victoria, Charlie told me he’d got through the first forty pages; quite impressive for a) a non reader, and b) a non Cardiff City fan – perhaps he’d become converted. We said our goodbyes and Charlie wished me well for the duration of my journey.
The mistake I’d made when booking my coach to Heathrow was not booking a direct coach. This was because direct coaches only went from the main coach stop at Sophia Gardens. Coaches from the Cardiff Uni stop went via Victoria, the only good aspect of this being a cheaper ticket. So I not only had to wait at Victoria, but I also was backtracking as I’d already passed the Heathrow turn-off on the M4 coming up!
I was still quite nervous at this stage: nervous about where the second coach would drop me; nervous about the pending long flights; nervous about not being able to have a cigarette for a long period, but really I needn’t have worried – it turned out to be all pretty straightforward.
I had a slight panic at the automatic check-in as my passport was not accepted, but the assistant tapped something into the system, and my two boarding passes were in my hands.
Through security and I was into the waiting area with ample time to spare, and here I thought I would make use of the range of “facilities” on offer. Basically, I was like a kid in a playground, as I first tried on a pair of Ray Ban Wayfarer sunglasses (which I was never going to purchase at over £100 a pop), I then tried on a Rolex watch (price, I didn’t dare ask); at the caviar shop, there were no free samples of caviar, but I was allowed a small piece of salmon and a piece of Easter egg, and finally, I had a quick squirt of La Coste aftershave before settling down for a refreshing beer. 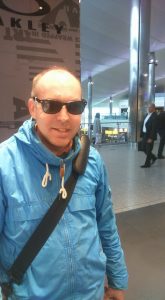 Finally, I was aboard the first of my two flights. I’d been advised to choose an aisle seat, but my pressing concern back at the checking in stage was whether I would need to pick up my luggage at my stopover in Istanbul (I was told I wouldn’t need to). Satisfied, and relieved at this answer, I forgot about specifying my seat, so I was instead given the least favoured middle seat. Even more oddly, I was placed between a married couple, sufficiently old that they didn’t need to sit together, with the husband needing the aisle due to his long legs.
They barely spoke to each other and I barely spoke to them, except as we neared Istanbul, I engaged in a little small talk and learned that they had travelled to so many places together I wondered if there was any location they hadn’t visited. South African and clearly quite wealthy.
I had a couple of hours between flights at Istanbul, but the airport was so vast it was a considerable distance to walk to the departure gate so I didn’t have too much time to hang around. Queuing up for the next flight was a bit shambolic, the Indonesians not quite exhibiting traditional British orderly queuing behaviour.
I was once again aboard and now facing a further ten hours of flying. Fortunately with the aid of a blind, I was able to get some sleep, not caring if I might have looked a little ridiculous. Turkish Airlines food was not that marvellous, but the entertainment facilities were quite good, though my eyes grew tired towards the end, and when I wasn’t dozing, I preferred to look at a blank screen.