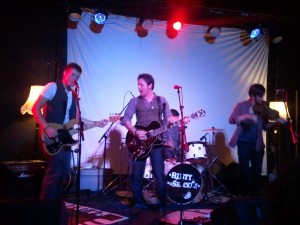 The only danger with album launches is that they can focus too much on the event, and not what happens after. The Method’s launch last year, as well as that of Houdini Dax, were both great gigs, but as they’re both Cardiff bands, sadly (although let’s sincerely hope not), they may be doomed to fail, like, lest we forget, Barker, long before them, and so many other Cardiff bands. Rusty Shackle are coming straight outta…Caldicot.

We were well warmed up by Sion Russel Jones. Merging Paul Simon and James Blunt, with the fringe of German hold ’em player, Benny Spindler, here was a talent we can expect to see more of. He quickened the pace towards the end with some up-tempo bluegrass songs.

The stage was decked out in the style of a cosy lounge, akin to the Buffalo Lounge, with old fashioned standard lamps and a bird cage; in the crowd, there was an abundance of parents.

Rusty Shackle greeted us with a sound reminiscent of Golden Green-era Wonderstuff. Second song reminded me of “American Style” by the more contemporary John Mouse.

Merging with that, a take on the Celtic routes of The Pogues, there are definite signals of a band with longevity. Fiddle player, Scott, and brother, James on rhythm guitar each have rugged looks that belie their age – a good sign. On lead, Liam intimates the hips of Elvis – he should work on them!

It wasn’t long before an impressive female collective was up and dancing – this band has a team of WaGs to rival that of the last Ashes winning team! A section of the Cheeky Girls’ classic was worked into the mix which had me chuckling, and the crowd slapping its collective ass.

The closing number, “Sunrise”, could be the Bluetones at their countrified best, and then there was the encore when it all went a bit bonkers (even without their version of the well known Dizzee Rascal track). If they could just pen a duet to rival “Fairytale of New York”, this band could go stratospheric! Expect many a drunken New Year’s Eve with Rusty Shackle as the soundtrack.