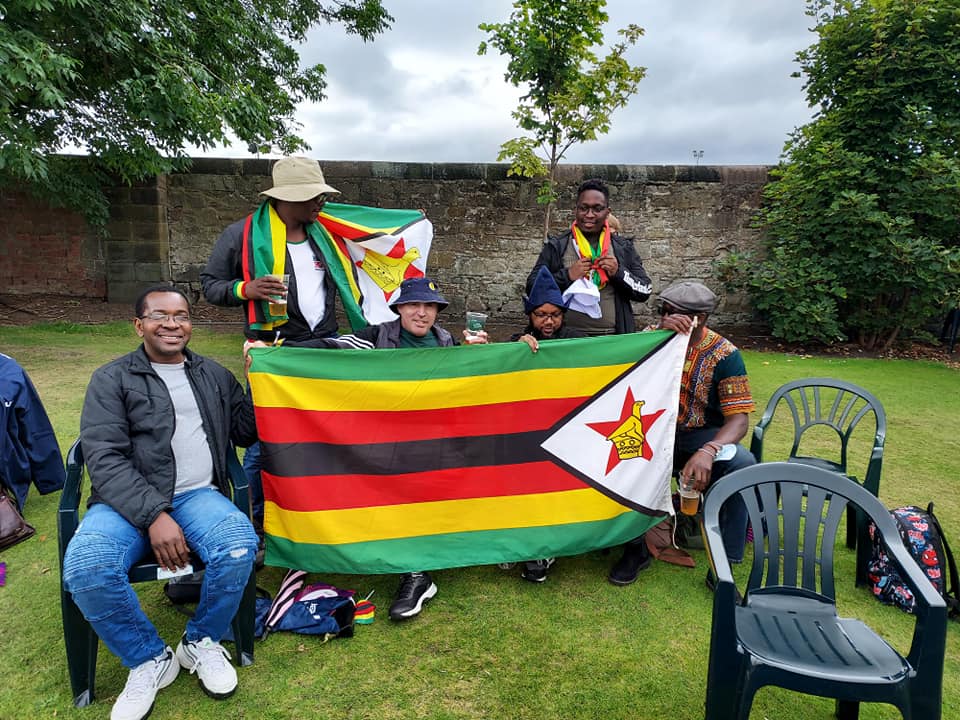 I think it was while browsing other cricket scores that I chanced upon the fact that Zimbabwe, my country of birth, were embarking on a short tour of Ireland. With restrictions still in place, travelling to Ireland was not going to be worth contemplating, but Zimbabwe were also playing a series of three T20 matches against Scotland, and getting up for one or two of these was an altogether more realistic prospect, particularly after I checked and discovered flights from Bristol were relatively inexpensive.

I had originally thought of going up for the second and third games. Cardiff were away to Coventry on the same day as the first game, and me and my friend Archie already had tickets for this. In fact, I also then realised that I had Corona-carried over tickets for a gig in Birmingham on the Sunday, the day of the third game (it was going to be a busy week!), so most likely, if I was going to get up to Edinburgh at all, it was going to be for just the second game in the series.

The only thing was, by the time I got around to thinking about buying a ticket, tickets for the second and third game were sold out! However, I contacted Scottish Cricket and they said they were likely putting an extra 50 tickets on sale for the second game, which indeed they did, and I snapped up one of these.

I’d asked one or two friends if they might like to accompany me. But apart from the fact that obviously not many of them were going to have a massive interest in Zimbabwean cricket, most of my friends are fucking skint all the time anyway. My older brother was also born in Zimbabwe, and in fact his eldest son was possibly due to start university in Edinburgh around the same time, but he had after all chosen to study for his first year at home online, and anyway, I don’t think my older brother was especially interested. So it was to be a solo mission.

The next thing was to book flights. It did appear that booking two single flights was cheaper than booking a return. So I booked the most essential flight – the flight out of course – and left booking the return till later. One issue, as the day of the game neared, was that in fact, there was quite likely to be rain on the day of the match. Indeed with four or five days to go before the game, the forecast was for rain all day, which might have resulted in the game never being played, or at the least, it might have been played with substantial delays, meaning that it might not have been sensible to book a return flight on the same day, soon after the likely end time of the game.

So I booked a ticket for the following day, but it was only once I went to do this that I realised, which I don’t think I’d properly checked before, that the only decent flight back on that day was at 8am, meaning probably having to get quite an expensive taxi in the middle of the night.

As the day of the match neared, the weather forecast improved, and I decided after all on taking the slight risk of swapping flights to an evening flight on the day of the game, which fortunately was easy enough to do through easyjet. I’d also booked two nights at a hostel (unable to find any reasonably priced hotels in the whole of Edinburgh), which I changed to just the one, as well as parking at the airport tavern near to Bristol airport.

So the day of my flight came about, as it happens, like I say, the day after coming back from Coventry, when I’d done the driving. Fortunately the flight was not until the evening and I wasn’t too tired.

I got to the airport tavern and in fact, they seemed to think I’d already paid, while I was certain that I hadn’t. I pointed out their mistake and paid them – I probably could have avoided paying, but better to be honest I suppose.

So after that, I contemplated spending the next couple of hours wearing a feckin mask, but in fact, they seemed to be pretty relaxed about masks in Bristol, so as many other people weren’t wearing them, I didn’t either. I wouldn’t have been able to drink the pint I bought if I had done after all. Seven pounds for a pint, the robbing bar stewards. I had a quick cigarette where I spoke to a Scottish guy who reflected on how poorly Scotland had been faring in just about every sport in recent years.

There was actually a bit of a party mood among many of those travelling to Edinburgh with at least one stag do and at least one hen party making the trip. The flight was so quick, I only just about managed to read the Echo I’d bought during the journey of a little over an hour.

It really is quite funny how one minute you can be in Bristol, and within no time at all you’re stepping onto a bus to go to the centre of Edinburgh, a place that would take over six hours to drive to.

It has to be said, Edinburgh really is a beautiful city and my hostel was in a particularly scenic part of the city, being right close to the castle. A nice, quirky hostel, but I didn’t hang around, just put my stuff in a locker and I was off out to sample the nearby drinking establishments.

The poor Scots were still living under the ridiculous rules which meant you were supposed to wear a bloody mask to enter the pub, before then being permitted to remove it once seated. This really was the most absurd regulation that I’m so glad we’ve put behind us in Wales at least. I poked my nose into a little pub I’d seen on my walk to the hostel that advertised live folk music, but it was “full”, with standing room apparently not allowed.

I finally found a nice whisky and gin place that I was given a window seat at. I ordered a pint and soaked in my surroundings. It was a nice enough place but a little boring on my own. I thought I should at least order a single malt before moving on though. I was brought the whisky in a small glass on a small wooden board which had three grooves in it, one for the whisky glass itself, one for a little glass of water and one for…something else. I was also given a larger glass with ice. I’m sure you’re not supposed to have ice with a single malt, but I thought I would try adding water via the device that was explained to me. The water came with a tiny narrow straw, and what you did was hold your finger over one end of the straw to take water into it. You then held the straw over the whisky, released your finger, and a couple of drops of water would be released from the other end into the whisky. This was really good fun, although at the same time I didn’t want to water the whisky down too much. I think I repeated the process four or five times – honestly, the straw was so tiny, it really didn’t hold much liquid – until I decided that would be enough. To be honest, the whisky was still pretty potent and I coughed a couple of times before finishing it. But it was very tasty. So that was fun.

With time ticking on, I thought about finding an off license to take drinks back to the hostel. However, I enquired at another pub, and they told me they all shut at 10pm anyway. So instead I just had another pint here, before grabbing a large tasty slice of pizza from across the road and heading back for some kip. Somehow, I got a little lost on the way back and I think then had one last little drink in the area where I’d got lost.

Back at the hostel, the only thing was, there was piano music coming apparently from the room below which was likely to keep me from getting to sleep. This seemed to be never ending, so at perhaps almost 1am, I headed down to see what was going on. It was just the one guy in a room where there was a piano. But I’m certain he was not actually playing it! It was just a bloke, sat at the piano, playing piano music via his ipad! I’d never seen such a ridiculous sight. I didn’t quite know how I was supposed to ask him to stop playing the piano if he wasn’t actually playing the piano. So instead I just spoke with him briefly and hoped the noise would end soon enough. I think it stopped within about half an hour or so and I must have drifted off to sleep.