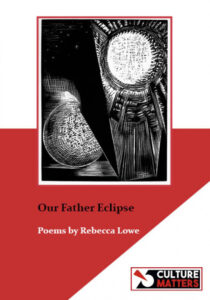 Becky Lowe emerges as a tour de force with this collection. It has very much a scholarly feel, but it is not a difficult book to read. It is very much of its time, yet will stand the test of time: a feat not often achieved in poetry.

Like Stephen Fry on QI, there is a sense of knowingness in the book, it is one clearly written by an intellectual, crammed full of not only quite cerebral verse, but backed up throughout with references, either Bible quotes, or excerpts from other poems, both ancient and modern.

Lowe speaks of a world in troubling times. She does not necessarily offer solutions (at least, not perhaps until the afterword where references are made to potential pillars of hope), more holding a mirror to society and to our leaders, almost shaming the reader into reconsidering the reality we are faced with.

Our Father Eclipse is not a book to be read if you need cheering up, there are frequent references to recent catastrophes.  End speaks of the “banality of living” and is followed with the verse Timothy 3:1-5 which tells of the time when people will become “lovers of self, lovers of money, proud, arrogant, abusive…”

That is not to say this book is completely lacking in humour. In Stoic, Becky concludes:

You praise the virtues
of the stoics:
‘If you wanted a stoic,
you should have married
a lamppost’
I retort.

There is humour,
Even in these dark times.

Ironic humour is found in one of her two poems about dreams, each verse beginning with the iconic line “I had a dream…” one verse being, “I had a dream…so I bottled it and packaged it, outsourcing production to China to save costs” and this is typical of the dark humour throughout this poem. I have spoken personally with Becky about dreams, and I wonder if it has become common for people in lockdown who are not getting decent sleep to have more bizarre dreams?

Lowe is very much the sceptic, of leaders particularly, past and present. Trump is mocked in Sanctuary when she says:

The President stiffly
lifts a Bible above
his head, as if he
were offering it
for auction:
What am I bid?

We are reminded of Bliar at the beginning of the What Is Truth section of the book, which contains Sanctuary.

Becky portrays herself quite clearly as someone fearful for the planet in terms of climate change, particular in a couple of the poems in middle section, At Tipping Point. The word virus is not used throughout the book, but there are two poems, also in this section, positioned around the book’s centre, Contagion and Love in the time of pandemic which although are topical, again, are littered with references which make the poems relevant to other times and situations – significantly the title is not Love in the time of THE pandemic.

This is just a very nicely and cleverly compiled collection, nicely illustrated. You feel as if a good deal of thought has been put into not just the poetry, but into the way the poems are arranged and put into order. It ends with the title poem, Our Father Eclipse, one of the stronger poems in the book, a brave ending, almost like the concluding song of The Stone Roses’ debut album, I Am The Resurrection.

Despite the mostly serious tone, this is still an enjoyable, if slightly painful read – Rebecca Lowe definitely does not depict life at its most easy and care-free. But it is definitely one that you could turn to again, perhaps with Google to hand to check on some of the more obscure words and references. I really feel that this is such a strong collection, it deserves to have been published by a far more established publisher, although if it helps with the success of Culture Matters, this can only be a good thing.

This book was re-read for the purposes of writing this review while listening to the album, Folk by Ultramarine, and Album 2 by Orbital.

Available to buy from Culture Matters