The Moons, “Fables of History” 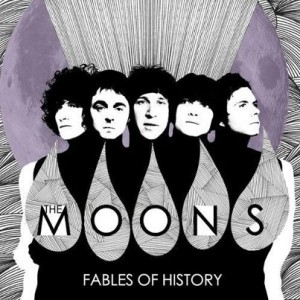 I chanced upon this band on a recent trip to London. They were playing an acoustic set at a Goldierocks/Selector Radio night. I was told by someone at the bar that they were in fact Paul Weller’s backing band. I believe it is only The Moons’ frontman, Andy Crofts who is part of the Weller set up, but still, it was pretty clear that they are popular on the mod circuit as a large group turned up on the night on scooters, sporting Fred Perry t-shirts.

The guy I spoke to was kind enough to give me a promo copy of the new album (without me even asking!), almost two months before its official release date. At the time, I was apparently one of only around 5 people to have this promo, so I felt quite privileged, and vowed to stick to his one condition that I shouldn’t copy it.

I’ve also found myself sticking to what I told him at the time, and that is to play it in the car. In fact, I’ve been playing it constantly! It only takes a look at the sleeve to realise that it is basically a homage to The Beatles (and the Revolver album more specifically). Personally, I have never been the biggest Beatles fan, but I have found myself really enjoying this album, so much so that I would genuinely place it as a record of the year contender. Unlikely that it will find its way into many charts given that the band is not well known enough, and that it is perhaps too steeped in nostalgia for it to be considered cool by many critics. But if you forget all that, just stick it on the stereo and give it a few listens, most likely, like me, you’ll relish the effortlessly authentic sound, the great tunes, the obvious affection for a particular style.

The key to the album is simplicity, with a fairly standard Ringo-esque rhythm throughout, and lyrics that will not threaten the brain with their complexity, but are soothing instead, with no mention of i-pads, technology, or anything at all in fact that would remind you that we’re living in the 21st Century. From the opening lyric to opening track, “Be Not Me” – Hold your hand in mine, But only for a moment, moment in time – we’re being advised that we’re about to be led on a trip back to a time that was in some ways more simple. It was a time when revolution was in the air, and this is reflected in “Revolutionary Lovers”. Sounding not unlike The Kinks, “English Summer” reeks of tradition, although might have sounded slightly incongruous being played at volume around the streets of the capital of Wales. “Can You See Me”, with its rich orchestral backing, could have been penned by Lennon, or a Lennon-inspired Gallagher. “Habit of A Lifetime” borrows the bass part from the outro of The Stone Roses’ “Standing Here”, and that’s about as contemporary as we get!

A mark of a good album is when you question whether the choice of single, “Jennifer Sits Alone” was the right one. Despite it being a good song, there are plenty which would have made better singles in my opinion. By the same token, it’s also difficult picking a favourite – there is no overwhelming stand-out, but the quality is consistently high throughout.

This was apparently the album Bradley Wiggins was inspired by for his win of the tour de France, and it does the job of lifting the mood very well. With the summer almost over, it almost seems a shame that the album is only getting its official release now, as it definitely has a summer feel. However, I think I will still be listening to this for many more summers – a classic in every sense of the word.

Fables in History is released on September 24th. The Moons are currently on tour, culminating in a gig at The Lanes, Bristol on October 6th.